A fascinating record of railway engines, trains and coaching stock recorded across Norfolk and Suffolk is set to raise funds towards a local community rail project after original footage taken between 1988 and 1991 was unearthed and placed on a limited-edition DVD.

Railway enthusiast Paul Godfrey has presented the volunteer run Lowestoft station shop and tourist information office with several copies of his DVD “Suffolk and Norfolk Railway Miscellany’ a railway themed video compilation featuring numerous diesel and electric locomotives and unusual workings to the area including Orient Express coaching stock and an Inter-City 125 rail tour. The recordings were made between 1988 and 1991, when Paul’s employer had invested in a Panasonic NVM3 camcorder. 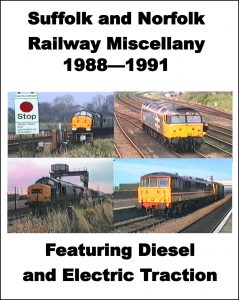 Paul said, “In the mid to late 1980s these devices were both revolutionary and expensive to buy and staff were encouraged to take the new camcorder home to try out. In the name of self-training, I decided to take advantage of the offer. “Since childhood I had held an interest in railways but had never taken any photographs or cine films of railway subjects. “From the early 1970s I also held an amateur radio licence (G8JBD) and as this interest by the late 1980s had turned towards building equipment to enable the transmission of 625 line television, I needed some video footage to transmit and the local railway scene seemed to be a good choice of subject.”

In March 1988 Paul went to Ipswich Station complete with the camcorder and recorded the movements of locomotives and trains from one of the platforms. At the time British Rail operated an open platform policy and no tickets were required to walk onto the platforms. A few days later he went to Norwich Thorpe Station for the day and recorded the comings and goings. While filming at Norwich he bumped into an old school friend who worked for BR at the time and he pointed Paul towards some of the more obscure workings, that Paul filmed later, like the Class 20 hauled weed killer train at Sizewell.

It soon became clear that a method of editing the video footage was needed, and Paul’s place of work thoughtfully invested in a JVC VHS Editing Suite that also came in handy to sort out Paul’s railway videos. He continued filming railways on and off for the next four years. In the early 1990s a local engineering group based in Halesworth got to hear of Paul’s railway filming exploits and asked him to show them the results of his work at one of their meetings. He edited the clips together creating the version that is the basis of this DVD. However, he did not complete the task and the early edited tape version lacked captions and titles that were just blank gaps between the various sequences. He provided something of a commentary in person for the Halesworth group event and planned to complete the video in the future but never did. He retired in 2012 and his access to the, by then, rather outdated JVC editing suite was lost.

Fast forward to 2021 and the partly edited VHS railway tape came to the surface again. After thirty years Paul realised the recordings were now of historical interest and he decided to see what he could salvage from the tape. The result, that was thirty years in the making, is on this DVD. A voice over commentary was never in Paul’s plans as he is uncomfortable with hearing his voice being reproduced. Paul thinks it would get in the way of the sound of the locomotives in action.

The compilation shows Class 08, 20, 31 and 37 diesel locomotives, along with Class 86 electric locomotives and the odd Diesel Multiple Unit in action. In addition, the visits to Lowestoft, Somerleyton and Great Yarmouth by Class 43 Inter City 125 sets are also on the DVD along with footage showing how engines would ‘run round’ (change ends) taken from the much-missed iron footbridge which once spanned the goods yard at Lowestoft. Other filming locations include Diss, Thetford, Bury St Edmunds, Saxmundham, Leiston and Sizewell.

Paul has now supplied copies of the DVD for sale at the Lowestoft station shop and tourist Information office, with proceeds going towards the Community Rail Lowestoft Central Project. Project Director, Jacqui Dale said; “We were thrilled when Paul approached us to see if we would be interested in stocking the DVD and are hugely grateful that he has donated a number of copies as this will help us raise much needed funds for our volunteer efforts at the station. “The DVD contains a fascinating historical insight into the railway scene across the area and compliments our growing range of rail related books and souvenirs.”

Paul added; “I hope that those purchasing the DVD will enjoy viewing all the old locomotives and rolling stock that I very much enjoyed recording over thirty years ago.” 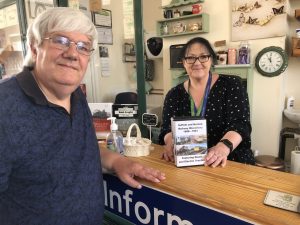