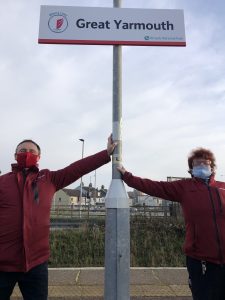 Great Yarmouth railway Station is the latest location to see worn and outdated signage replaced with new branding featuring the Broads National Park, thanks to a joint tourism initiative between the Wherry Lines Community Rail Partnership and the Broads Authority.

New signage has also been installed at: Brundall Gardens, Brundall, Cantley, Reedham, Haddiscoe, Somerleyton, Lingwood and Acle stations. The project is part of a larger scheme to promote tourism by rail within the area following the launch of a brand new fleet of trains serving the Wherry Lines, which run between Norwich and Lowestoft and Norwich and Great Yarmouth. Described as the most spectacularly scenic rail route in the East of England, the Wherry Lines serve communities from Norwich to the coast. Crossing the rivers Yare, Waveney and travelling alongside both Breydon Water and Oulton Broad; these lines are an important transport artery, connecting both residents and visitors within the national park.

The signage initiative also compliments Broads artwork installed recently at Lowestoft and Great Yarmouth Stations and a Broads makeover of the waiting room at Norwich station.

Martin Halliday, Community Rail Development Officer at Community Rail Norfolk said of the project, “We are delighted to have extended our signage project along the Wherry Lines to include Great Yarmouth. The Wherry Lines Community Rail Partnership were keen to create one uniform brand, with distinct signage that promotes a sense of identity. “The Wherry Lines pass through two counties and a number of districts and parishes which traverse the Broads National Park. As the National Park was the common uniting feature of each route, it seemed appropriate to make it a central focus of the new signs, helping to promote tourism and community engagement with the area.”

John Packman, Chief Executive of the Broads Authority is delighted with the signs: “Great Yarmouth is intrinsically linked with the Broads and it is fitting that this is recognised at the station. Our partnership with the Wherry Lines Community Rail Partnership is enabling improvements to station signage throughout the Broads whilst also reminding passengers that they can access some stunning countryside locations by rail. I am sure that it will inspire future visitors coming to Great Yarmouth for the traditional seaside attractions and unique cultural offer to sample the Broads during their travels around the area.”

Greater Anglia’s Customer and Community Engagement Manager, Alan Neville, said, “It’s great to get the message out there that these railway stations offer easy, car-free access to the Broads.I hope this will encourage more sustainable journeys to the area to help reduce the pollution and congestion caused by cars. Research shows that trains are the most environmentally friendly form of transport after cycling and walking, with greenhouse gas emissions per kilometre by rail being far less than cars. Our new trains are more efficient and produce less particulate pollution than our old ones which will help to make rail travel in East Anglia an even more environmentally friendly option.”

The second phase of the initiative will commence in early 2021 and will see additional information on points of interest, walking and cycling routes, nature and local history, installed at individual stations.

Rail enthusiasts also have a chance to obtain some of the old signs which are being made available to purchase from the Community Rail shop at Lowestoft Station, proceeds from which will be used in future Wherry Lines projects.