Members of the public have another chance to view a hugely popular railway exhibition which is returning to Lowestoft Station from this weekend.

DEPARTURES, an exhibition of over 70 images taken over the past five decades by Norwich based photographer David Pearce, illustrates the evolving nature of the railways of Norfolk and North Suffolk and was originally funded by Community Rail Norfolk, parent organisation of the Bittern Line and Wherry Lines Community Rail Partnerships. 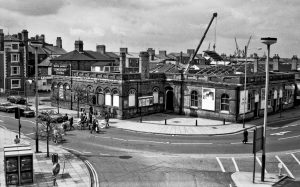 First presented in June 2019, the exhibition was planned to return to coincide with an anticipated visit of steam locomotive Tornado to the town on Saturday 3 October, sadly the rail tour is no longer able to run, however the exhibition will still be open from 10am-4pm.

Speaking of the exhibition David said, “Railways, in common with almost all other forms of transport, are constantly in a state of transition. It is easy to take for granted the familiarity of the friendly crossing keeper dutifully closing the gates across the road to allow a train to pass. The train itself will have passed this way many times before, adding its own comforting intimacy born of habit. When changes occur, new perspectives arrive. For some they are accompanied with regret, whilst for others, they are greeted with optimism.”

David was born in Suffolk, brought up in the East Midlands, went to college in the North East, and spent his working life as an itinerant teacher in Norfolk and Suffolk. Early retirement in 2011 saw him attempting to sort and scan his substantial collection of railway negatives and slides.

A return to part-time work has not prevented him from undertaking the role of Vice-Chairman of the Bittern Line Community Rail Partnership as well as belonging to two railway photographic circles and umpteen railway societies. He has presented illustrated talks for various clubs and societies across the country, curated several exhibitions, produced railway books and articles and has a very understanding wife, and four boys, none of whom have the remotest interest in railways!

Martin Halliday, Community Rail Development Officer said; “We are pleased to have another opportunity to host Departures and delighted that David has agreed to share some of his extensive collection once again. This was our first event in the restored Parcels Office in 2019 and contains some terrific images documenting just how much railways in our area have changed over the past fifty years.”

Over the past few years the station has received new heritage colour and lighting schemes, doors leading from the station to the town centre have been restored and re-opened, new planting has been introduced and other buildings on the site have been stabilised and cosmetically improved pending future development. In July this year, a new tourist information office, shop and Community Rail hub were opened in conjunction with the Wherry Lines Community Rail Partnership and Broads Authority.

Work to transform the formerly derelict Parcels Office included restoration of many original windows and doors, a new ceiling and flooring with all the detailed work being undertaken by local craftsmen. Funded through grants by the Railway Heritage Trust and Association of Community Rail Partnerships, the Lowestoft Central Project also received support from the East Suffolk Lines and Wherry Lines Community Rail Partnerships and rail operator, Greater Anglia. Improvements lead to a national award and a Railway Heritage Commendation in late 2019.

The Departures Exhibition is free to enter and features images taken across Norfolk and Suffolk including Great Yarmouth, Lowestoft, North Walsham and Norwich. Opening times are from 10 until 4 on Saturday October 3 and from Wednesday 7 to Saturday 10 October, again daily from 10 until 4. Social distancing measures including a one-way system will be in place for the exhibition and numbers may be limited on entry to ensure compliance with current guidance.