Community facilities at Greater Anglia’s Lowestoft Railway Station will once again provide a key focus for the town’s annual heritage festival this year, despite the organisers having to adapt due to the ongoing Covid-19 Pandemic.

Lowestoft Heritage Open Days, which attracted some 15,000 people to a range of tours, exhibitions, talks and activities in 2019 has adopted a revised format for 2020 with a large proportion of activity moving online however this year the superbly restored Parcels Office at Lowestoft Station will host two major free to enter public exhibitions running from Friday 11 until Sunday 20 September. 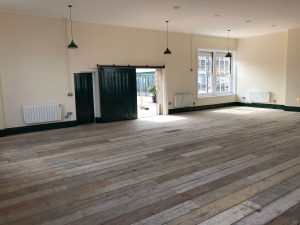 The exhibitions include one of the largest displays of historic Lowestoft photographs ever to be seen in one venue. Presented by Bert Collyer of Lowestoft Museum, the display will provide a fascinating opportunity to look back at how much the town has changed with images featuring many much-missed landmark buildings, shops and businesses. Accompanying the exhibition will be a display by local historian Bob Collis of the Lowestoft Aviation Society, featuring the local air war from 1939 to 1945. With a mixture of photographs, documents, memorabilia, and other artifacts re-telling and explaining the impact of bombing raids on the town and other air activity during World War 2. 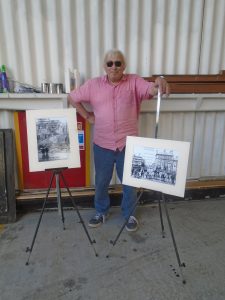 Supported by the Lowestoft Central Project and the Wherry Lines Community Rail Partnership, the exhibitions at Lowestoft Railway Station are free to enter, and will run daily from Friday 11 through until Sunday 20 September between 10am and 4pm. Visitors are advised that to maintain social distancing, numbers will be limited on entry and all those viewing the exhibition must wear a face covering.

Also available from the Community Rail shop and Tourist Information Office at Lowestoft Station will be a free walking guide to several historic buildings commissioned by Railway entrepreneur Sir Samuel Morton Peto during the 19th Century. Although many iconic buildings have sadly been destroyed during post-war development, there is still much to see including some of the largest grand terraces to be built outside London.

Chair of Lowestoft Heritage Open Days Festival, Paul King said: “Although smaller than in previous years, we felt it important that we still celebrate in a positive way some of our towns unique heritage, art and culture. We have therefore worked to devise and present a fantastic, yet safe version of our festival that everyone can enjoy be it virtually from one’s armchair, or a selection of in-person events for those that still wish to get out and about.”

Other events that can be enjoyed in person at this years’ free to attend festival, include historian Ivan Bunn with a chance to hear more about Lowestoft’s lost or forgotten buildings in a fascinating illustrated talk taking place at the Seagull Theatre in Morton Road on Saturday 19 and Sunday 20 September, nightly at 7.30pm. Free, socially distanced tickets can be booked via the theatres online box office.

On September 12, 13, 19 & 20 between 11am and 5pm, award winning artist Mark Burrell will open his studio at 42 Melbourne Road with a number of his paintings of Lowestoft including the original cover and pencil drawings from the book The Iron Bridge by author John Ward on display along with other works. No booking is required for this free event. On Saturday 19 September between 1pm and 3pm, Nautical Fossils Hidden by History brings a special pop-up exhibition outside Lowestoft Museum in Nicholas Everitt Park, Oulton Broad. Featuring some fascinating fossils with an opportunity to see if you can guess what type of creatures made such an impression all those years ago!

A chance to see where actor Sir Michael Caine once lived is included in History in the Street – a walking route around Cleveland Road, Grosvenor Road & Windsor Road. Taking place on Friday 11 and Saturday 12 September daily from 11am, the public are invited to take a stroll around these three streets and view enlarged pictures displayed in front of historically important properties. Information on this self-guided tour will include the 1916 German Naval Bombardment, the house where actor Sir Michael Caine stayed in when he trained in repertory theatre in Lowestoft and the home linked to a tragic 1913 murder. The three streets also contain some superb examples of grand Victorian architecture.

On Saturday 12 September between 1pm & 4pm, the Friends of Kensington Gardens invite you to come and explore this beautiful oasis located above the southern end of Lowestoft Esplanade. The gardens were partly laid out by German prisoners of war and the event will include a chance to discover the parks fascinating timeline in history as well as its hidden nature.

During the festival, window displays will include The Old Chemist at 59 High Street, with information detailing the history of the Chemist from 1851 including information on how pandemics were handled in the 1800s and 1900s. Also featured in the High Street will be an opportunity to hear more about the history of number 45, now home to Uncle Sid’s Zero Waste Store. The building dates back several hundred years and a window display will document many changes within the shop, in which it is reputed that King George II stayed in 1737. Whilst visiting the High Street it is also possible to follow an existing walking trail which includes some of the original Scores – passageways which once led to the Beach Village, and learn more about the remaining historic buildings their inhabitants and visitors.

Specially created for the festival this year will be a window display at the Kirkley Centre in London Road South. Featuring a look back at the former building which occupied the site and was once home to many leisure attractions over the years including a cinema, bingo hall, swimming pool and roller-skating rink.

Online only events include a virtual tour of Lowestoft’s abandoned Town Hall, a guided walk, the history of Lowestoft Porcelain, early human life at Pakefield, and a talk on the 80th anniversary of the Battle of Britain.

Virtually Here, will celebrate local creative culture hosted within an online virtual tour of Lowestoft Town Hall. Over twenty-five 360degree photographs will be linked together to form an interactive virtual heritage tour of the most important parts of the interior. Using audio, still images and video, this online tour will also showcase a curated selection of artists and performers across a wide range of the local creative arts scene.

On Sunday 13 September at 2pm via Facebook Live, amateur archaeologist, Paul Durbidge, who in 2001 searched and found evidence on Pakefield beach of the earliest humans in Britain, presents an online talk entitled Pakefield Man, Introduced from Pakefield Church by Trudie Jackson.

The following Sunday, 20 September, Janis Kirby presents a fascinating talk on the famous Lowestoft Porcelain Factory direct from the Lowestoft Museum. Available online only via Facebook live, the event commences at 2pm and will bring a unique insight into the origins of the factory and its products. Uncle David’s Postcards, the Lowestoft Ones! Will see another virtual heritage talk by Richard Mundy with a presentation of Lowestoft Postcards, with modern pictures taken by local photographers to produce a ‘Now and Then’ display with included dialogue. This will be broadcast online only via Facebook live from 1pm on Saturday 19 September.

Lowestoft and the Battle of Britain, an 80th Anniversary heritage talk by aviation historian Bob Collis. Will be broadcast on Facebook Live from midday on September 19. Many people think the Battle of Britain took place over Southern England and the East Coast escaped unscathed, however Lowestoft endured raids which killed 19 people and was transformed into a fortress against invasion. Bob has made a special study of the air war in this area and details the background to how that fateful summer of 1940 affected Britain’s most Easterly town.

For full details of all events please visit Heritage Open Days and use the simple search facility to check out what’s happening in Lowestoft.