On Friday 10 September between 10am and 4pm, the station Parcels Office hosts an exhibition featuring the significant role Lowestoft has played in feeding the nation, at home and abroad, at war and in peacetime. Using material generously provided from the archives of CWS, Morton, Beecham, Maconochie, Birdseye and other companies with a longstanding relationship to the town, the event will feature a remarkable and unique collection of memorabilia and include rare film footage of some of the former factories that played such a vital role in Lowestoft’s employment and social history along with material from some of the industries still running in the town today. The exhibition will also run daily from Monday 13 through until Saturday 18 September between 10am and 4pm and from 10am to 2.30pm on Sunday 19 September.

The station host’s a special Edible England Local Produce Market on Saturday 11 September between 10am and 4pm featuring some of the finest produce and crafts from the area and a chance for younger visitors to gain a free Bushell’s Bakery goodie bag.

On Sunday 12 September between 1pm and 3pm, an exhibition of postcards from the popular local collection ‘Uncle David’s Postcards’ will feature various topics including agriculture, comedy, fishing, food and many with a link to the town.

Also taking place on Sunday 12 are a series of talks beginning at 3pm with local historian and Chair of the Lowestoft Archaeological and Local History Society, Richard Mundy. In What History Means To Me, Richard uses some semi-autobiographical elements as a vehicle to explain how he became interested in history from a young age in the East End of London and how this led to his involvement with the history of Lowestoft.

Lowestoft railway station is a remarkable survivor, having escaped bombing and bombardment during two world wars, the infamous axe of Dr Beeching, the British Rail era and more recent local authority attempts to relocate it further west. The stations very survival is therefore quite remarkable and at 3.30pm, aviation historian Bob Collis shares details on how the station survived both wars relatively unscathed. In 1915 bombs were dropped by Zeppelin and these early raids damaged the Great Eastern Railway stables as well as several properties in Denmark Rd. They are believed to be the first known attack by high explosive bombs on the entire UK rail network, preceded just 25 minutes earlier by an incendiary device dropped by the same Zeppelin on a coal wagon at Halesworth. 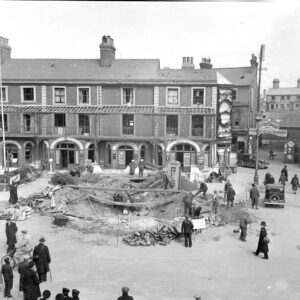 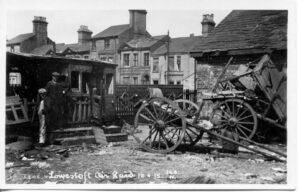 Bob’s detailed research also highlights just how close the site came to destruction during World War Two when bombs dropped by the Luftwaffe destroyed or damaged nearby houses, roads, rail and harbour infrastructure, severely damaging the former Imperial Hotel situated opposite the station.

Rounding off a busy afternoon at 5pm, historian Trudie Jackson tells the little-known story of the rivalry between Lowestoft and Pakefield which originated through a dispute between the Victorian Lifeboat Men of 1885.

As is the case today, Victorian lifeboat men risked their lives to save others in peril on the sea. Behind the undoubted bravery and courage shown, there was also a fierce rivalry between the boats stationed along our coast as in Victorian times lifeboatmen could earn money through launch, rescue and salvage. In 1885 this rivalry came to a head after the Lowestoft boat left its own waters and effected a rescue in the territory of the Pakefield boat. Pakefield Lifeboat men believed they had lost money because of this action and led by the Rev Lewis Price, rector of Pakefield, decided to form their own RNLI branch but without gaining the RNLI’s permission first. The subsequent dispute would affect relations between Lowestoft and Pakefield for years to come and culminated in people from Lowestoft marching to Pakefield Rectory and burning an effigy of Rev Price on the beach.

A final station-based talk takes place on Sunday 19 September at 3pm as historians David Butcher and Ivan Bunn mark over 400 years of change within the local parish landscape. Based upon information from a manorial survey of 1618, the event will trace the development of the local community and show what once occupied the ground of today.

The Manor Roll of 1618 was a survey in verbal form but without a map and is believed to be the most important surviving document enabling physical reconstruction of Lowestoft in earlier times. Minutely detailed in the description of fields, plots of land, buildings, roads and tracks, areas of common and woodland, it also gives details of ownership and the location of properties relative to those adjoining. Use of this material led to the creation of a coloured landscape map, produced at the Heritage Workshop Centre in 2002, followed by a transcription and translation from Latin of the document. The workshop has now produced a further work, identifying each of the Manor Roll’s forty-three sectors of Lowestoft parish, as described in 1618, and reveals what stands above ground there today. Copies of the work will be available on the day.

On Saturday 11 September the festival will also be supported by one of the region’s most popular heritage attractions, the East Anglia Transport Museum who will, for one day only, be running free heritage bus services around the town. Offering a nostalgic opportunity to go back in time aboard two exhibits from the museum, both buses were also built in Lowestoft at the former Eastern Coach Works. The free services will run every 30 minutes along routes connecting the museum in Carlton Colville with the railway station, calling at Pakefield, the town centre, London Road South, Gordon Road, Artillery Way, High Street, Oulton Broad North Station, Bridge Road and near to the Carlton Marshes Nature Reserve.

Use of the railway station has been made possible by the Wherry Lines Community Rail Partnership and the Lowestoft Central Project which over recent years have worked to rejuvenate and renovate the UK’s most easterly transport hub. This is the fourth year that they have collaborated closely with the Heritage Festival, in 2019 with the support of Network Rail, members of the public were able to visit the Lowestoft signal box for a final time before it was switched out, an event which won a national tourism and heritage award.

Martin Halliday, development officer at Community Rail Norfolk, parent organisation of the Wherry Lines said, “We are thrilled to be able to support this terrific festival once again and look forward to hosting the information hub and welcoming people to the events being held within the station and the Parcels Office Exhibition Space.”

Diana Moore, Chair of Lowestoft Heritage Open Days added; “We are extremely grateful to the Wherry Lines Community Rail Partnership and volunteers from the Lowestoft Central Project for their continued support which has enabled us to greatly expand the number and range of activities this year, providing a superb historic base for several events including exhibitions and talks in addition to hosting our information hub.”

A printed guide to all the festival events will be available from various outlets and the railway station in early September with full listings currently available online by visiting www.heritageopendays.org.uk and searching ‘Lowestoft’.