Historic name returns to the Railway at Lowestoft

A piece of railway history has returned to Lowestoft with a new sign installed at Coke Ovens Junction, half a mile to the west of the town’s railway station. 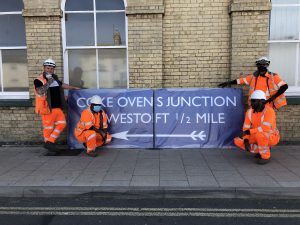 The name of the junction disappeared in 1970 when the Lowestoft to Yarmouth line closed and although Coke Ovens Junction pre-dated the opening of the direct Yarmouth route in 1903, having initially served as the point where the railway had numerous coke ovens, the name had survived for over 100 years.

Early in 2020, a public appeal for images of the original sign was made and Network Rail in conjunction with the Lowestoft Central Project, the Wherry Lines Community Rail Partnership and engineers from Balfour Beatty have now installed a replica of the famous sign close to the original junction, bringing back a small but important part of local railway heritage.

Coke Ovens were used to heat coal without air, the final product being a more stable substance to use in railway engines. In 1854 the Eastern Counties Railway had thirty coke ovens at Lowestoft, the refined product being transported to Thames Wharf at Bow Creek, London. It is believed that in the early days, the Lowestoft ovens received shipments of coal by sea, with coal being supplied by the Northumberland & Durham Coal Company.

At their height, the coke ovens at Lowestoft numbered 83. A biproduct of the process was creosote and the enterprising railway used this in the treatment of timbers used in the manufacture of sleepers and other wood used for construction and a vast yard on the banks of Lake Lothing became the railway sleeper works.

Coke production at Lowestoft is believed to have ended in 1866, however the point where the later Yarmouth route left the lines to Ipswich and Norwich continued to be known as Coke Ovens Junction until 1970.

Network Rail recently constructed two full-length modern freight sidings at Lowestoft, replacing the former goods yard of which sections had been unused for several years. As part of this, the new infrastructure was connected to the main running lines towards Ipswich and Norwich near the site of the original Coke Ovens Junction and, following the recent modernisation of signalling and infrastructure along the Wherry Lines, Network Rail took the opportunity to bring this historic name back into use as both a junction and timing point for trains.

Ellie Burrows, Network Rail’s route director for Anglia, said: “When people see something they are familiar with on their journey it can provide comfort, security and fond memories. I’m pleased that we’ve been able to reinstate this sign close to its original location for our passengers to see when approaching Lowestoft.”

Community Rail development officer, Martin Halliday added; “The Wherry Lines Community Rail Partnership together with the Lowestoft Central Project are pleased to have been able to work with Network Rail and wish to thank Ian Martin from the Anglia route signalling team, David Taylor from the Wherry Lines modernisation project and Balfour Beatty for their help in bringing this small yet significant part of Lowestoft’s illustrious railway history back to life.”