New heritage area to be created adjacent to Lowestoft Station

Work has commenced on a creating new heritage area adjacent to Lowestoft Station which aims to celebrate the history of the former rail-link with the towns Fish Market and Outer Harbour. 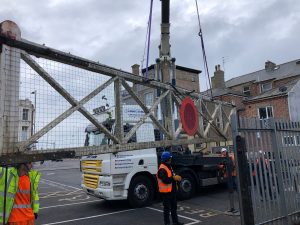 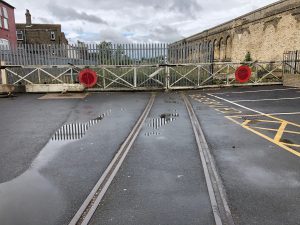 The Lowestoft Central Project in association with the Wherry Lines Community Rail Partnership have taken delivery of a set of railway crossing gates, which will be installed forming a 60ft wide backdrop to the area at the rear of the station, where the former track across to the harbour has been preserved, some fifty years since it was last used.

The gates will be restored and repainted and mounted onto their original concrete posts to form a western boundary to the area, complimented by an original semaphore signal and interpretation panels telling the history of the link which when operational, saw millions of tonnes of fish transported via the rails which ran alongside Waveney Rd and across the A12 into the station site until the early 1970s. In addition, aggregates from the former railway shingle screening plant, which was located on the north pier extension, were also conveyed across this section of line until the late 1950s.

The south east corner of the station, home to the short stay car park, will also house the heritage element, part of an ongoing rejuvenation scheme across the station site which has, with the support of the Greater Anglia asset team, included new low energy lighting housed in Victorian style casement lamps, a heritage colour scheme and during 2019, restoration and conversion of the former parcels office into a new public exhibition centre, full restoration of the concourse doors and cosmetic improvements to the exterior of the former buffet building, unused since the 1970s.

Over the summer months, volunteers from the project will begin restoring the gates, which have been gifted by Network Rail following their recent completion of the Wherry Lines modernisation project and were transported to the location by Lowestoft based company, Wavetrade Ltd.

Lowestoft was an important railway port, having developed rapidly from the mid-1800s after Samuel Morton Peto purchased the harbour and built the railway to the town. In addition to lines running to Ipswich, Norwich and the former direct route to Yarmouth, the railway developed and operated the fish market, harbour and South Pier with a number of rail related manufacturing and supply networks including the Harbour Engineering Works, Sleeper Depot, Concrete Products factory and south of the town, a full network of freight lines serving shipyards and factories. Morton Peto also developed much of Victorian Lowestoft, including the Royal Hotel, St John’s Church and several other landmarks.

In the 1920s, Lowestoft was the busiest port owned and operated by the Great Eastern Railway with tonnage through the harbour far outstripping that of Harwich. 100 years on, Network Rail have recently developed brand new freight sidings on the site of the former goods yard, creating an opportunity for port related rail freight traffic to return. A £60m infrastructure modernisation scheme on the Wherry Lines routes was completed in February and train operator, Greater Anglia has introduced an entirely new fleet of passenger trains.

During 2019, the Lowestoft Central Project received recognition for its efforts with a National Community Rail Award along with a commendation at the prestigious Railway Heritage Awards held in the presence of HRH Princess Anne.

Martin Halliday, Community Rail development officer at Community Rail Norfolk said; “The Wherry Lines Community Rail Partnership and the Lowestoft Central Project are pleased to commence this latest development in our ongoing efforts to regenerate the station, this scheme aims to enhance the south eastern aspect of the site and enable us to both celebrate and share more of Lowestoft’s rich railway history.”

Project volunteer, Tim Miller who helped to coordinate the installation added, “We are delighted to receive the gates and with each of them being 27ft long, it proved quite a challenge to get them into place and we are grateful to the assistance received both in obtaining and delivering these to site. It will certainly be a busy few months ahead for the project as we begin work to restore them and create our heritage area.”